In 1811, Jacob Christian Jacobsen, the founder of Carlsberg, enters the world. When his father dies in 1835, J.C. Jacobsen takes over as a brewer. J.C. was born to brew. Driven by his passion for beer and an early interest in the natural sciences, J.C. Jacobsen sets out on a lifelong journey to improve the quality of beer. His first stop is Bavaria where he studies the brewing techniques for a new beer at Gabriel Sedlmayr's zum Spaten brewery in Munich. In the summer of 1845, carrying two pots of Spaten yeast in a customised hat box, J.C. returns to Denmark by stagecoach.

On this long journey, he keeps the yeast cool by stopping frequently and dousing it with cold water. J.C. Jacobsen's first batches of lager are made in his mother's copper wash basin. They are refined in his brewery till he gets them just right.  This new lager needed a new brewery with larger cool storage space. Taking the name of his five-year-old son, Carl, and the Danish word for hill, "bjerg", he builds his new brewery just outside Copenhagen. With that, Carlsberg is born in 1847. International approval came just 21 years later when the first Carlsberg beer was exported to Great Britain.

The Carlsberg brewery suffers from a massive fire 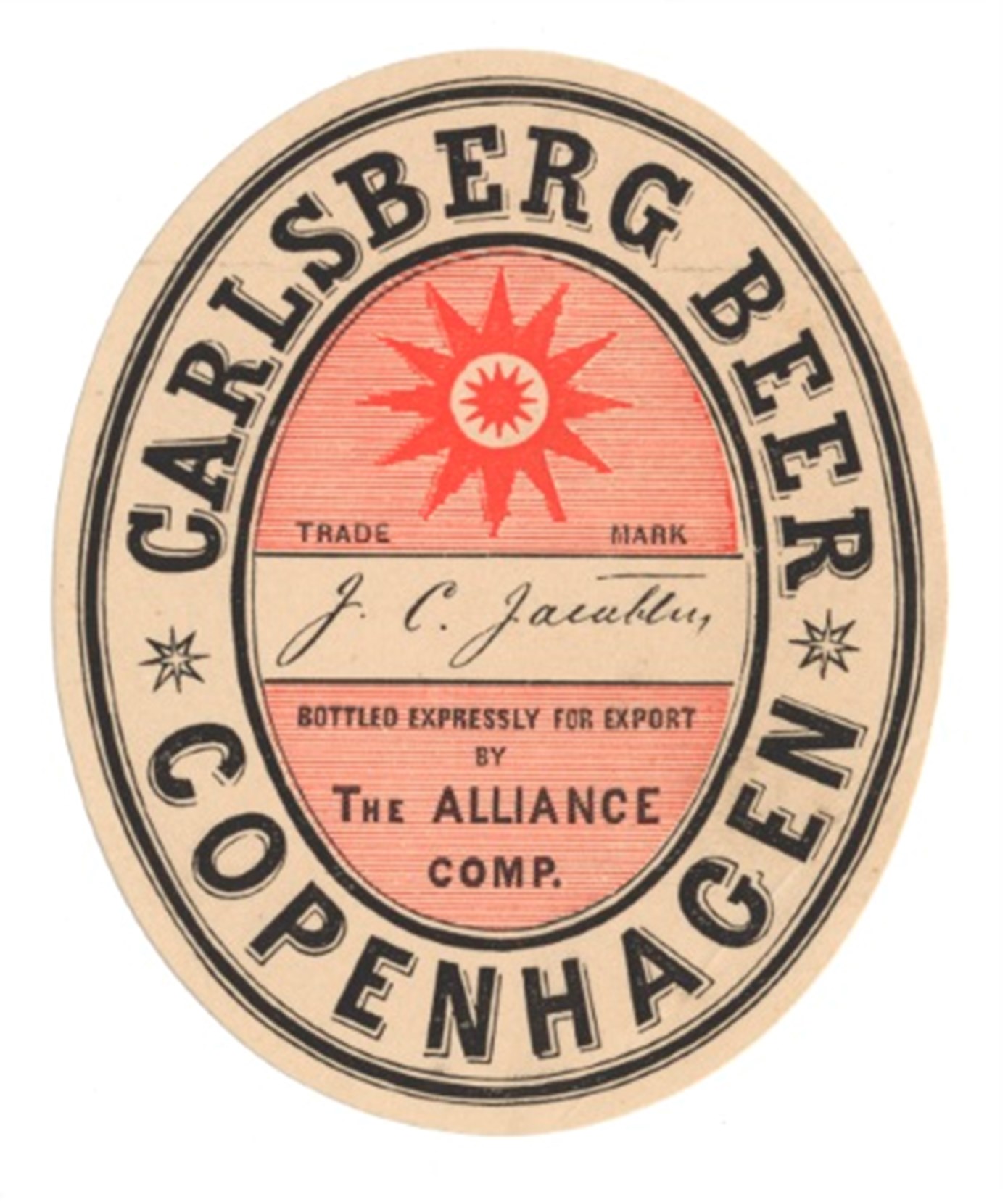 J.C. Jacobsen uses the incident to modernise the brewery yet again. He installs a cooling system that improves product quality and leads to a dramatic increase in sales. Now, Jacobsen's son Carl returns from studying brewing process in Europe. He is invited to brew his own beer in the newly constructed annex brewery. He names his brewery New Carlsberg. The first thing Carl does is to meet market demand by pushing capacity and cutting his father's brewing process in half. In 10 short years, sales at his New Carlsberg surpass that of his father's Old Carlsberg. Carl is selling his beer under the Carlsberg name but much to his father's dissaproval, Carl produces a beer with a shorter storage time. This sparks a family fued between father and son. J.C. Jacobsen has his lawyers evict Carl from the Annex and legally attempts to limit his production capacity.  He even tries to force Carl to change the name of his brewery. J.C. also wants to keep the label design to himself, but Carl does not cooperate. Father and son eventually reconciled in October 1886, just before J.C. Jacobsen's death.

After falling out with his father, Carl Jacobsen sets up his new independent brewery New Carlsberg

By 1883, professor Emil Christian Hansen develops the key to a perfectly consistent beer production. He discovers that organisms are composed of different fungi and that yeast culture can be cultivated. He isolates a pure yeast culture and changes the concept of brewing forever. The method of cultivating pure yeast is worth a fortune and will revolutionise the quality of beer worldwide. But instead of keeping it secret, J.C. Jacobsen decides to give it away sharing his breakthrough with brewmasters around the world. Maybe J.C. Jacobsen knew the original could never be beaten or maybe he knew in doing so, there would be a little bit of Carlsberg in a multitude of beers. Regardless of his reasons, original Carlsberg yeast is used on most of the single lagers that are crafted today.

1904 - Carlsberg pilsner is brewed for the first time

The Danish architect and artist, Thorvald Bindesbøll is commissioned to design the label that will redefine the look of Carlsberg beer forever. During the same year, Carlsberg also becomes the first Danish brewery to receive an appointment to supply beer to the Royal Danish Court. The crown in the Carlsberg label is a testament to this prestigious honor. Carlsberg's natural ingredients are symbolised by the label's hopleaf. For J.C. Jacobsen and son Carl, the look of the Carlsberg estate was also very important.  Both father and son believed that attractive surroundings like art could raise a man's spirit. They wanted to explore new architecture styles for their industrial buildings and strove to create an aesthetic brewery.

Carl Jacobsen wanted to prove that a factory's chimney could be a work of art. He had Carlsberg's famous twisting chimney built in 1900. The star gate at the original entrance bears the symbol of the 12 pointed star. The 12 pointed star is the trademark of old Carlsberg. Carl Jacobsen's elephant tower is perhaps the best-known building on the estate. The elephants symbolise Carl's four surviving children. Jacobsen chose the symbol of the elephant because it represented strength, loyalty and industriousness; the perfect match to his motto Laboremus Pro Patria (let us work for our country).

Bottle agreements are signed with companies in Ireland, Gibraltar and Malta to bottle Carlsberg beer for their local markets

Carlsberg's international presence continues to grow in the 1990s as the company increases the degree of ownership or acquires new shareholdings in breweries in Portugal, Sweden, Italy, Vietnam, China, Poland, Latvia and Croatia. 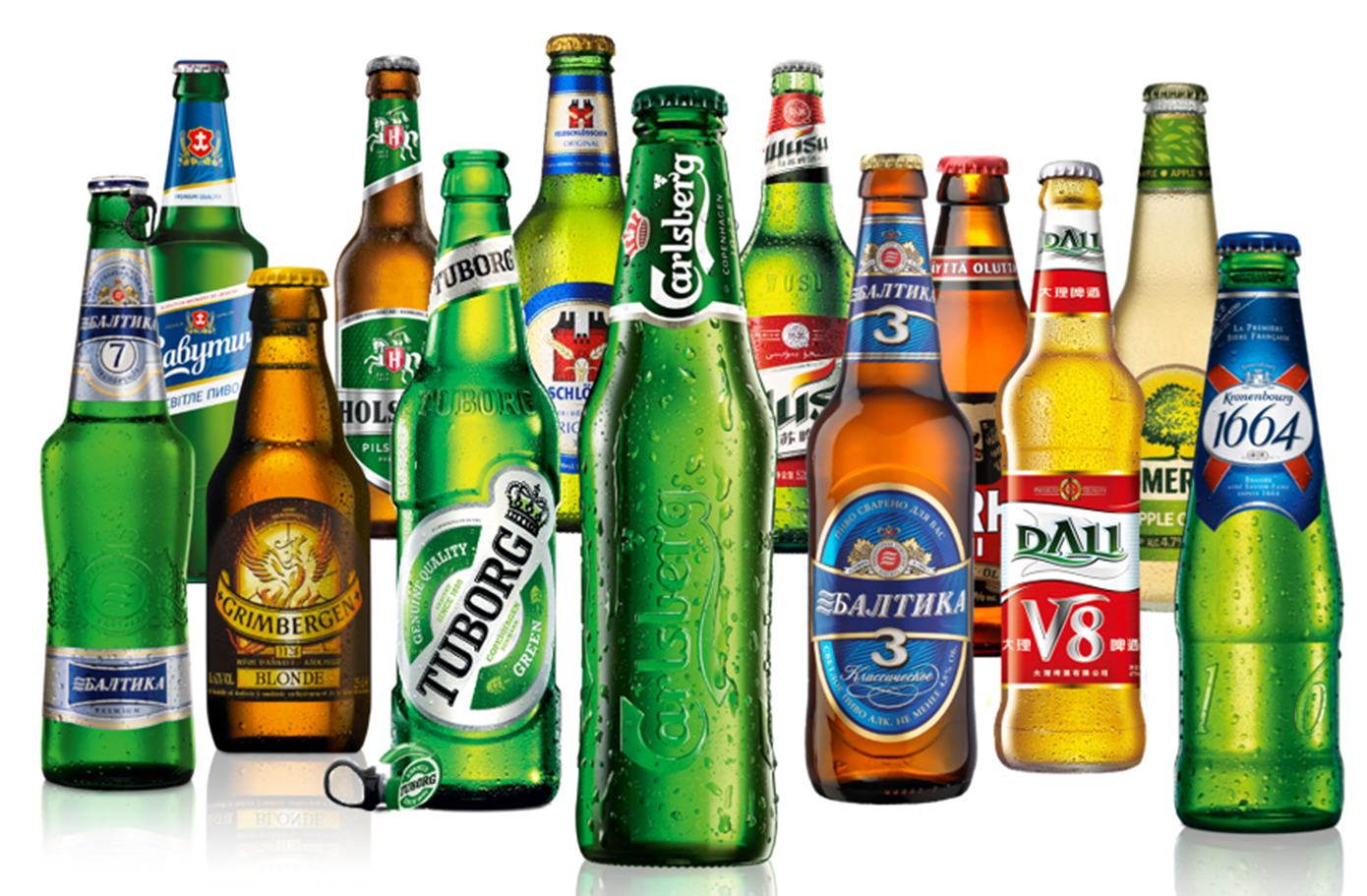 Carlsberg is listed on the Copenhagen Stock Exchange

Find out more about the Re-brew project